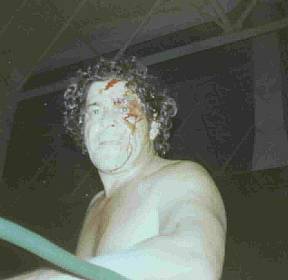 From the late 1950s through the 1970s, Tito Montez reigned supreme in Arizona. He held numerous titles, including versions of the Arizona State title, United States Title and "World Tag Team" titles as recognized in the area.  He lost and won back the Arizona belt so many times people lost track of how many times he wore it.  He was also branded "The Champion Of The Cage" due to his beating so many people in this form of match. Only one man, Jody Arnold, ever defeated him in the cage.

As a finisher, Tito used the abdominal stretch and the flying body block. Again, Jody Arnold remains the only man to break out of his dreaded submission hold.

"I faced Gorgeous George three times in Arizona," Montez likes to tell people. "He was drunk all three times."

This is not surprising, as George's drinking became legendary. Tito was facing him on the way up, when George was sadlky on his way down.

For nine weeks straight, Tito feuded with Don Kent at the old Phoenix Madison Square Garden in the 1960s and filled the arena to standing room only each week. He finally defeated Kent in a cage and ended the feud on the tenth week. With the people going home happy, the house was down the following Friday.

Feuds were common for Tito, as were bloody matches. One time while looking through Arizona photos, fellow wrestler Tony Hernandez had this to say when he came to a shot of Montez. "F------ Tito always has blood on him. I wouldn't recopgnize him on the street if he didn't have blood all over his face."

The most unusual partnership came when the hated Kurt Von Steiger was double crossed by Bobby Mayne and Jody Arnold, leading Tito to come to his rescue, with a popular pairing being made afterward.

Though he never appeared in Phoenix Madison Square Garden as far as I recall, the infamous Sheik did come through Arizona in the 1960s and wrestled two matches. One was in Casa Grande and the other in Tucson. Tito Copa took him on one time. Tito Montez also faced him. What a pity Sheik did not stay longer as the feud to end all feuds could have been made.

The Pacific Northwest was also a scene where Tito made constant appearances. In fact, after retirement from the ring he would move out of Arizona to settle in Portland, Oregon and operate  carpet cleaning business.

Some rumors have circulated Tito's health has not been great as of late, but for a man in his 80s he seems to still be going relatively strong as of this writing.

Shortly before his death from a heart attack in November of 2010, Maniac Mike Gordon stated Tito had been one of his most imposing opponents.

"In looking back, I really have to say some of my bets matches were in Arizona in the 1970s. One bgif eud was with Super Argo, but it was with Tito I think I had my best matches. He usually came out on top, butt here were few moments where the people were not making noise. There was no one except the late Buddy Rogers who could get a reaction from the crowd like Tito did. The thing is, the people hated Rogers. They loved Montez. Few wrestlers ever could get the people to rally behind them like Tito Montez. He was like a conquering king in Arizona. There were times after his wins, where the people carried him around the arena on their shoulders. I kid you not!"
Posted by Dale Pierce at 1:14 PM